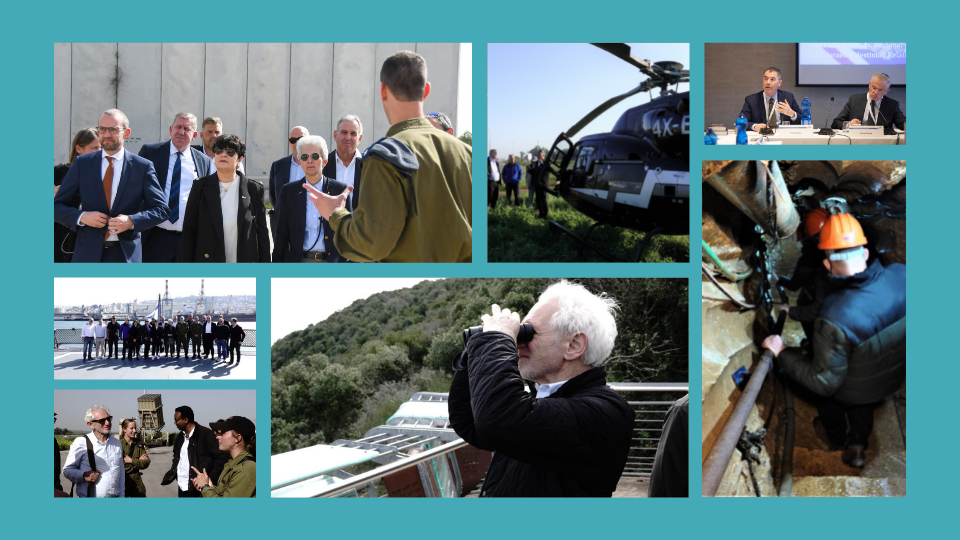 Our programs consistently provide the opportunity for exposure to the challenges Israel faces as well as the many opportunities it has to offer, broadening our network even further.

With the Russian aggression against Ukraine generating major shifts in European defense policies, ELNET’s role in strengthening the relations between Europe and Israel has never been more crucial.

Here are some of the most notable highlights of ELNET’s activity from the last recent months:

ELNET hosted a delegation of MPs from the German Bundestag Defense Committee. The Delegation met with the most senior members of Israel’s defense system, were the first delegation of their kind to tour Israeli Navy Dolphin-class Submarine and a Sa’ar 6 Corvette, and had an exclusive visit to Israel Aerospace Industries (IAI) where they were briefed on the Arrow 3 Missile Defense System and on the Heron-TP drone.

ELNET-UK hosted its first delegation to Israel of senior broadcast and media journalists. Given how biased the media can be against Israel, this visit was crucial to give leading UK journalists first-hand exposer to the challenges on the ground.

ELNET hosted a delegation of young and promising European politicians from 10 different countries, in cooperation with the Israel Ministry of Foreign Affairs. By empowering the leaders of Europe’s tomorrow, this delegation’s purpose was to promote strong and lasting relations between Israel and Europe for the future.

ELNET hosted a delegation of French MPs, all of whom are members of parliament committees or working in cyber-related groups, together with leading French cyber experts. The tailored delegation solely focused on cyber security, technology, & innovation in Israel, during which the delegates met with the IDF’s most elite cyber units and got the exclusive opportunity to visit the IDF Cyber Simulator.

ELNET, in partnership with the Israeli Ministry of Foreign Affairs hosted a high ranking parliamentary delegation from Greece’s leading opposition party, ELNET, in partnership with the Netanya Academic College organized an unprecedented symposium in the French Senate entitled « The Abraham Accords: a Promise of Peace for the World ». During the Symposium, 25 high-level speakers from France, Israel and several Middle Eastern countries discussed the prospects and impact of the Abraham Accords.

ELNET hosted 45 Luxembourg business leaders from the Luxembourg Federation of Young Business Leaders for a special briefing by the IDF’s International Spokesperson, Lt. Col. Amnon Shefler. This was the first time visiting Israel for most of the delegation.

ELNET jointly with GINSUM, the German-Israeli Network of Startups and Mittelstand and Germany’s BDI held the 2nd German-Israel Space Forum. The Forum’s focus was to intensify cooperation between Germany’s dynamic NewSpace ecosystem and Israel’s world-class start-up ecosystem in order to forward the great economic and strategic potential for both sides.

The weekly policy briefings by senior officials and leading experts organized by ELNET on current policy topics continues. The last few months have featured a special briefing series, which began with the invasion of Russia into Ukraine, and gives special focus to the various implications of the war on Israel, Europe, and the Middle East region.

ELNET has been increasing its outreach to European ambassadors in Israel with individual meetings and three strategic tours so far, to experience the complexities that Israel faces on the ground, and bolster cooperation between Europe and Israel in several fields. More tours planned are in the future.

Activities in the upcoming months: